This page contains the key data for Knowsley around population, housing, economy and employment. The data contained here will be  updated on the last day of each month with any new data that becomes available. 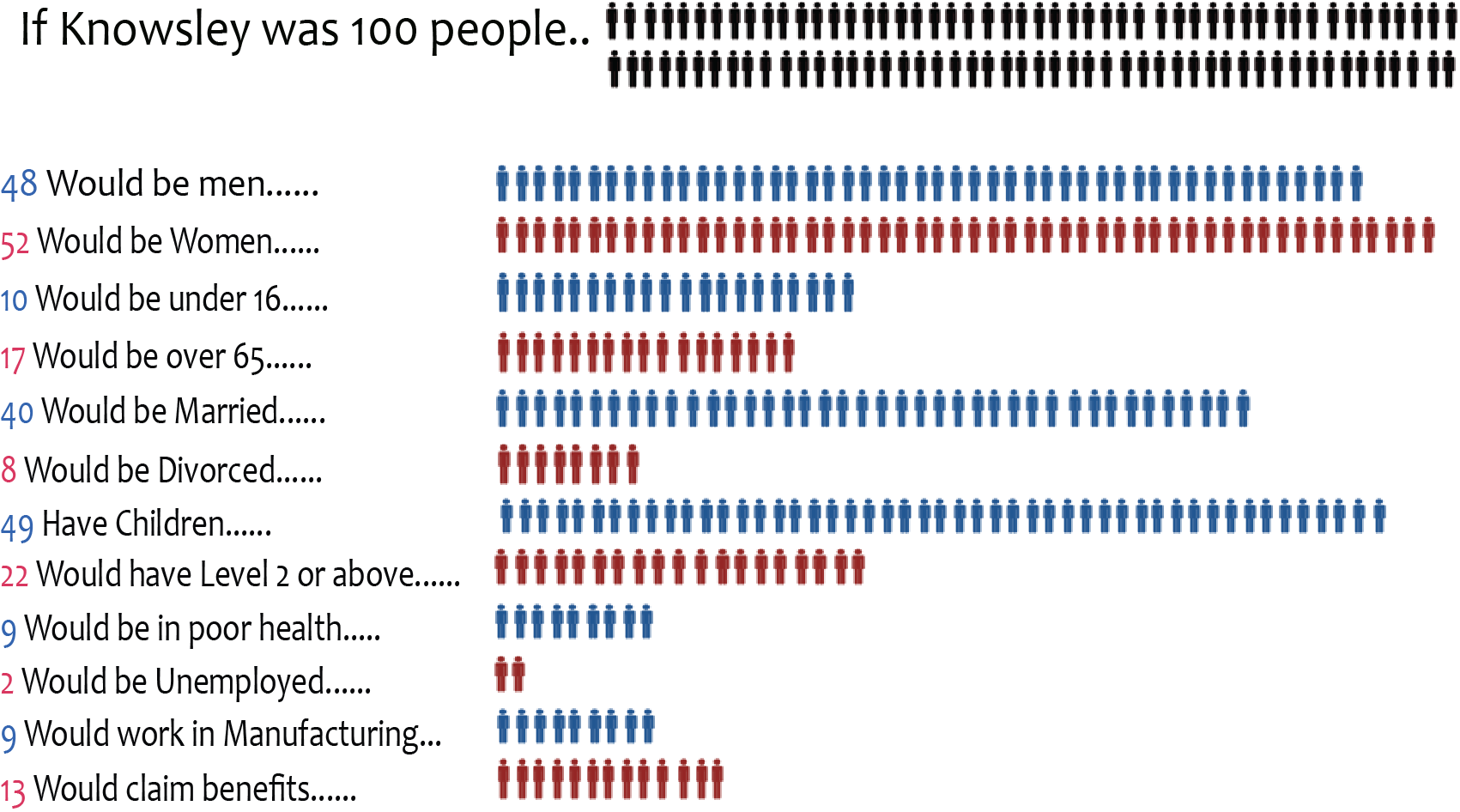 The following data is based on Knowsley population Mid Year Estimates (ONS) 2016. They will be updated when data becomes available at these levels in October 2018.

The table below shows the current Knowsley population split by the 15 ward areas by the four main age bands;

The chart below shows the differences between wards by the percentage age split within each area. Although the 20-64 age bracket makes up the highest percentage in each ward there are some differences in each ward such as the Roby ward having a much higher proportion of 65+ residents (24%) than Shevington (11.2%).

For greater population detail, the following link contains the breakdown of the population by ward in Knowsley by single age. This allows for users to access the total numbers of residents at a single age point or between two ages in each of the council wards

As the tables above show, the breakdown by age across the Borough can show marked differences.  The map below shows the distribution by ward across Knowsley in a more visual way with the darker areas indicating the wards with the highest numbers of population. 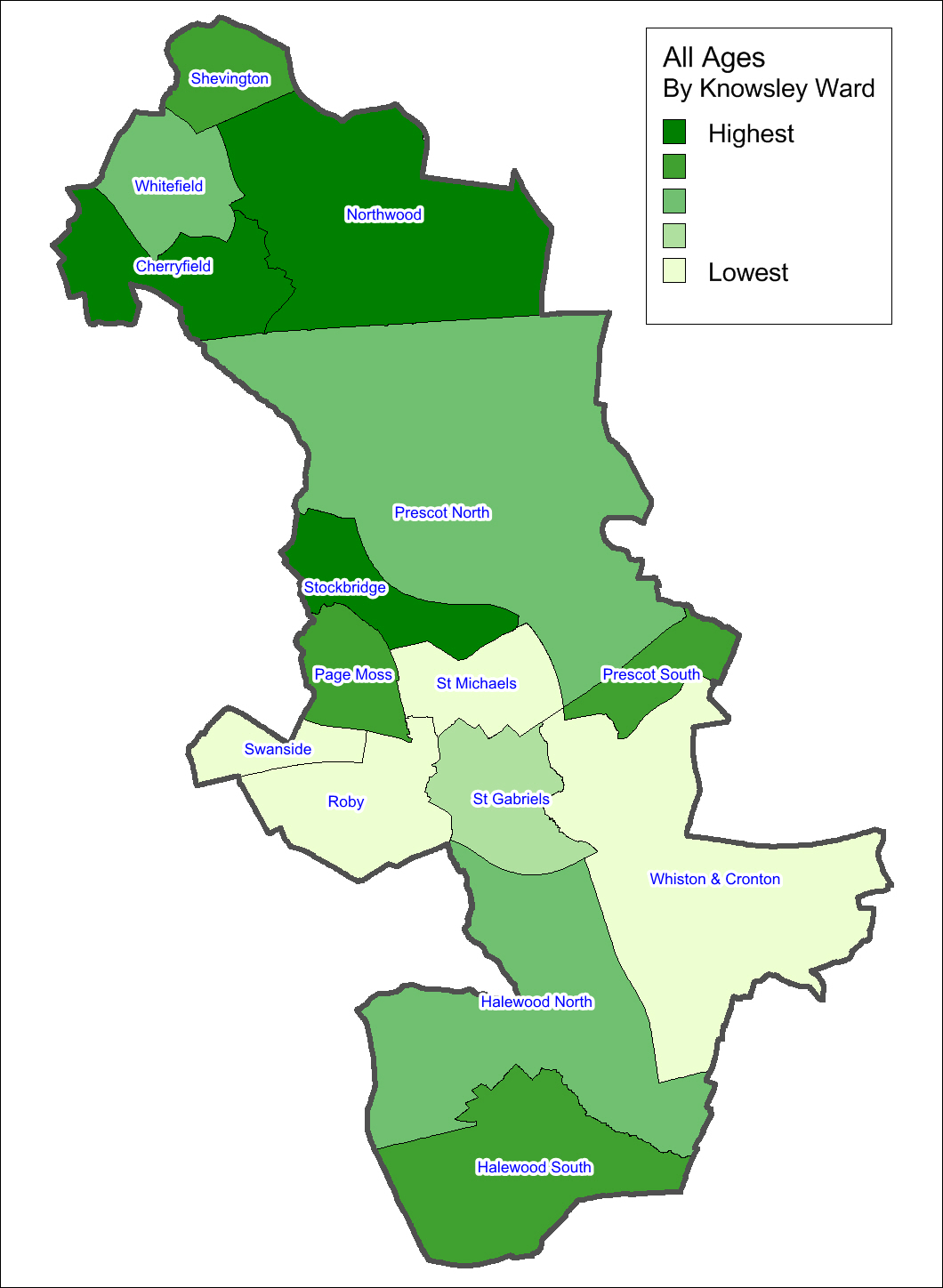 For further information, the link below will access a customisable map which shows Knowsley broken down into the four main age groups and shows in more detail the special distribution of the population of the Borough.

The breakdown of the ethnicity of the residents of the Borough, has not varied greatly, with the vast majority of residents identifying as “White British” (97.2%), with all other residents accounting for 2.8% overall.

The latest population projections show that by 2039, the Knowsley population is expected to reach 151,953 should the current population trend continue. 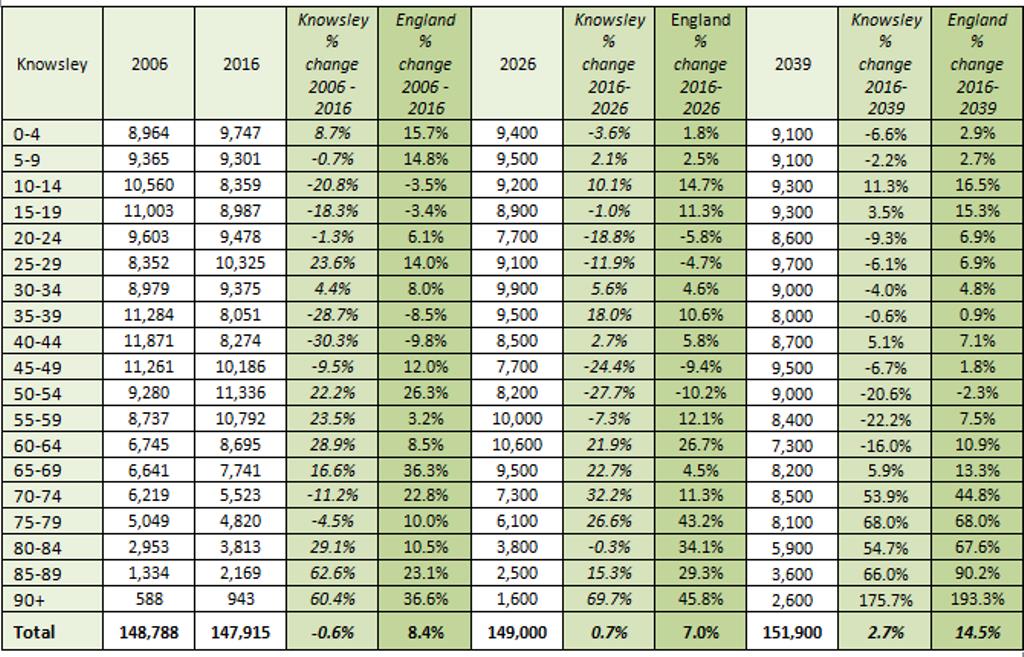 The table shows the numbers for all four factors from 2008 through to 2016;

The table below shows the overall life expectancy across the council wards and Roby has the highest expectancy for males (79.8 years) and Whiston and Cronton for females (84.2 years). 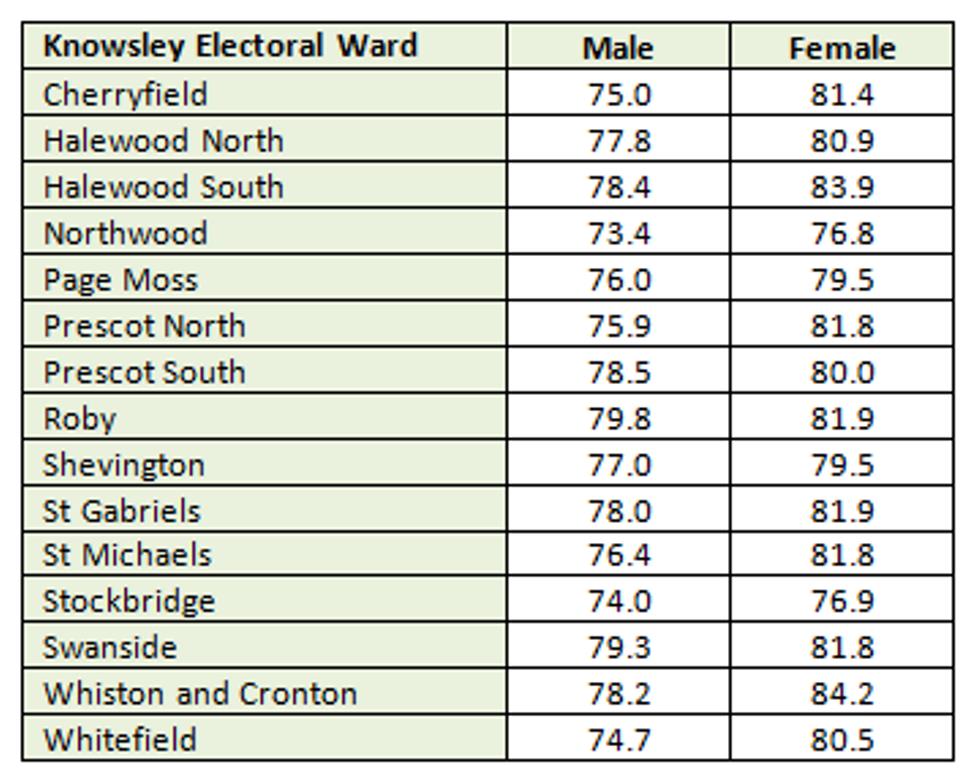 The links below contain further data and information around population and can be used to compare to other local authorities as well as the UK overall.

Annual population estimates for the UK and its constituent countries, the regions and counties of England, and local authorities and their equivalents. Estimates for lower and middle layer Super Output Areas, Westminster parliamentary constituencies, electoral wards and National Parks in England and Wales and clinical commissioning groups in England.

Any cookies that may not be particularly necessary for the website to function and is used specifically to collect user personal data via analytics, ads, other embedded contents are termed as non-necessary cookies. It is mandatory to procure user consent prior to running these cookies on your website.